GPS Track - North Sound to Anegada and back to St. Thomas 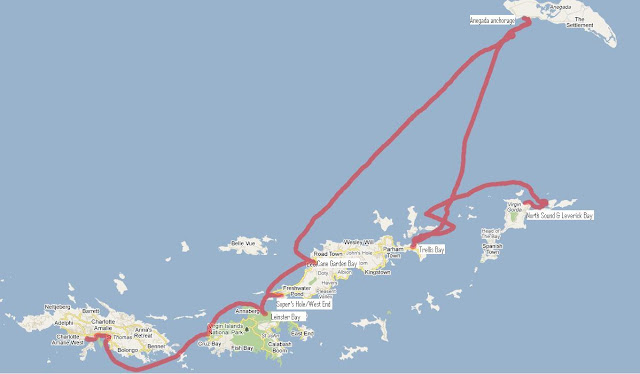 (First half is posted below)

Our final day of sailing on Mowzer for this vacation - a beautiful day with about 10 knots of wind (beam to close reach) and very calm seas.

Almost back to reality

A leisurely pace was called for this morning as we lingered in Leinster Bay to enjoy our last full day on Mowzer. This time, being at the other end of the bay we tried the snorkelling around Watermelon Cay and although the coral reef was more damaged than the other end of the bay, the most beautiful Rainbow Parrotfish – by far the showiest guy in the neighbourhood was followed by a Yellowtail Snapper and a number of Foureye Butterfish that really put the whole aquarium picture together.

Next stop – Cruz Bay to make ourselves legal in the U.S. Checking in at Cruz Bay requires that you pick up a mooring ball in Caneel Bay and then dinghy round the point into the harbour. The constant ferry and dinghy traffic along with a pretty solid ocean swell makes anchoring here difficult especially with the prospect of all of us leaving the boat for an hour or two. We spied the last available mooring ball and made a race for it, but conceded to another monohull as they approached ahead of us. Strangely though, they had come from upwind and when they were unable to pick up the float line in the swell, they decided to head further down the bay. As we had already scanned the rest of the bay and knew there weren’t any other balls to be had, we made a perfect approach and were quickly secured and ready to head into customs and immigration. 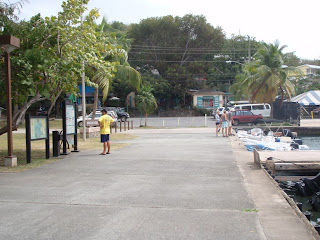 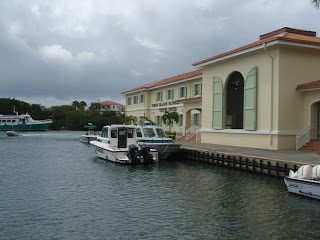 All checked in, our final destination was back to Charlotte Amalie and CYOA, with one little detour to Crown Bay for fuel. Henry put Mowzer up the dock beautifully – his best one so far. It makes you feel so tense trying to slip gently up to a concrete wharf that can scratch, dent and otherwise mar that perfect hull. Watching Jay at CYOA negotiate Mowzer backwards and sideways into a tight spot between two other boats at the dock is definitely watching a master in action!

This marks the end of this journey and we will be heading back to Ottawa tomorrow. We hope to have a little time after we complete some paperwork with John and Nancy to have a quick walking tour of Charlotte Amalie before heading to the airport.

One exciting final bit of news that has put the crown on this trip: Jim just picked up his email and he has received acceptance at Waterloo for Co-Op Physical Sciences. Woohoo!!! Way to go Jim!!
Posted by s/vMowzer at 3/04/2010 09:37:00 PM

Finally, we must set our sights for home. The BVI weather gods have another thought though and while the winds have been changeable and sometimes incredibly light over the past 10 days, overnight and this morning the winds set in with a howl. Our anchor set well yesterday and held us safe and sound through a rocky night, but in the crowded anchorage this morning at Anegada, getting off the hook proved to be difficult. We finally succeeded and pointed our noses back south towards Tortola.

The distance is about 16 miles (as the pelican flies) but with the winds and the ocean swell, we decided to head for the other end of the island and actually try to clear customs today. Actually, mother nature pretty much decided this for us and we went along with the ride. We managed to sail almost the whole way with a double-reefed main and half-furled genoa, seeing winds at a steady 22 knots, gusting to 25 (with one big gust that registered 27!) The seas were running across our course at about 4-6’ so it was a bit of a rough ride, but exhilarating none-the-less. Our final log from Anegada to Soper’s Hole showed 35 nautical miles (approx. 64 km).

Lunch-time found us running along the north shore of Tortola so we put into Cane Garden Bay for a break and some Pelican-dive action. There was a group of four birds fishing for their lunch and they were quite a sight to see. They are so prehistoric-looking and ungainly on land, but watching them launch themselves from quite a height and spear into the sea to almost always come up with a catch is amazing. 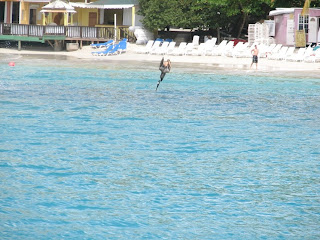 Cane Garden Bay itself is very pretty, ringed with a beautiful white sand beach and palm trees and is considered one of the prettiest spots in the BVI. Unfortunately the beach is covered in beach-chairs-for-rent so is probably not a place we will choose to spend a lot of time in the future. The winds whistled down out of the hills and led to a very swingy lunch-stop as well. Perhaps the view out to sea for those on land is prettier? 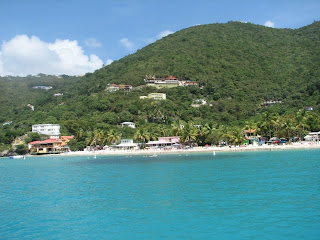 We headed on down to Soper’s Hole in the afternoon to clear out of BVI Customs. This cost us a total of $5.00 so that didn’t break the bank. We also filled up with diesel while there with fuel at $3.75/gallon so the total cost to fill the boat was $75.40. We’ll still need to top off in St. Thomas tomorrow but at least we’ll know we have plenty to make it there.

All paperwork and chores dealt with, we headed over the Leinster Bay for our final night away from the dock. This is the bay with the abandoned sugar-mill that we visited early in the trip if you remember, so it’s nice closure to come back here before heading back to CYOA. All-in-all a pretty tiring day, but satisfying too knowing that the boat (and us) could handle what was thrown our way today. Lessons learned? I’ll write about those later.
Posted by s/vMowzer at 3/03/2010 07:00:00 PM

We have definitely slipped into a schedule dictated by the rising and setting of the sun. We’re usually up and eating breakfast by 7am and if dinner isn’t finished by 8pm we’re asleep in our plates. Today was our most energetic day by far and so writing up this at 8pm is a far stretch so we’ll see how coherent it is.

Getting low on dinghy fuel we decided to move the big boat up a bit closer to the landing docks for today. This put us in better range of the restaurants for dinner tonight as well.

But first, we decided to see the famed Loblolly beach on the north shore of the island and we wouldn’t restrict ourselves to the local open-air taxi service. Mopeds looked fun but a bit pricey for three, and a car or jeep just seemed too easy, so we decided on bicycles. 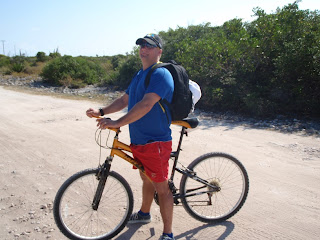 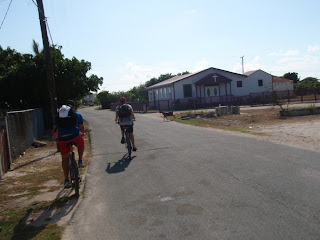 Anegada has an elevation change of perhaps 10’ so cycling the cement roads is pretty easy – just remember to ride on the left. Once we reached the settlement where most of the 180 residents live, we turned off on a sand track which led us up to the north shore and a beautiful stretch of pink and white coral sand beach that rivals the resort beaches of Dominican Republic, but better as there was almost no-one up there. The reef that surrounds the island, actually is the island, comes right up to the beach in places and is supposed to be a spectacular place to snorkel. Unfortunately, the surf was up and there is quite a strong current so we found it a bit of a challenge, but nothing daunted we headed out. We decided that Leinster Bay was a much better location, especially when we came face-to-face with a 3’ barracuda who eyed us up quite casually. 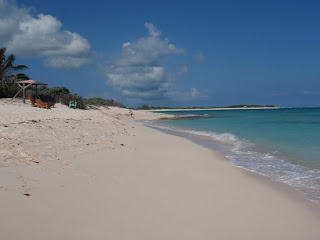 Lunch was a very civilized affair of roti (for Jim and Catherine) and a seafood sandwich (for Henry), served up at “Flash of Beauty” on the beach. At home, this and many of the open air restaurants look like very sketchy establishments, but if you sit yourself down you are served a delectable home-cooked meal served with pride. Today’s was no disappointment.

The ride back to the anchorage was very hot and a stop along the way on the sand-flats was called for to cool off. 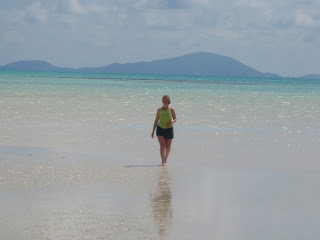 As this is our last evening in Anegada, we decided to partake of the traditional dinner at a beach-side restaurant for lobster and seafood. We returned to The Whispering Pines to be greeted by Nayasha, the waitress we’d met previously, and thoroughly enjoyed our dinner.
Posted by s/vMowzer at 3/02/2010 07:00:00 PM

Anegada is a different world

This morning arrived with not a breath of air and as we were heart-set on getting to Anegada we decided to motor up anyway. It took just over two hours and of course as soon as we arrived so did the wind, but not very convincingly and it has remained calm most of the day. 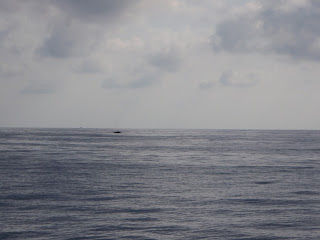 Arrival in Anegada is a complicated affair as you have to thread your way into the anchorage between the reefs. Some of the anchorage is perhaps 10’ deep but for the most part it seems to run about 4’-6’ which is just about deep enough so long as the tide doesn’t drop you too much. The first thing we noticed was the colour. While the other BVI islands are hilly and scrub-green, Anegada is a flat reef island and the colour is amazing turquoise and white. It is picture postcard Caribbean. 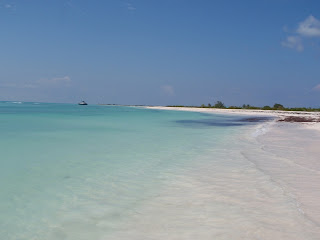 We spent the day scoping it all out and decided that we will rent bicycles tomorrow morning before it gets too hot to make our way across the island to where the ‘good beaches’ are. Seeing nothing wrong with the beaches on our own doorstep, we wandered around the west end of the island and enjoyed stopping in at some of the local haunts and open-air bar/restaurants. 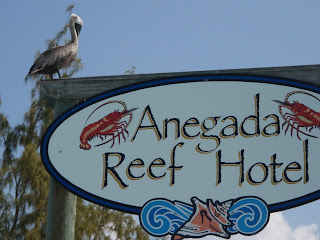 In the evening we settled on “The Whispering Pines” to continue our survey of island conch fritters. This has become our happy hour treat and we are getting to be quite the connoisseurs. Dough to conch ratio, degree of deep-frying and tanginess of dipping sauce are all important criteria. On a scale of 1-5, Whispering Pines rates 3-4-5, not bad! The pines here are quite beautiful and very airy – no structure compared to pines at home and you certainly wouldn’t get much of a straight board out of them, but they are very different from much of the vegetation we have seen so far. Surprisingly, the only palm trees we’ve seen on Anegada seem to have been purposely planted around specific buildings and restaurants. 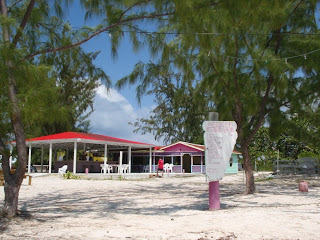 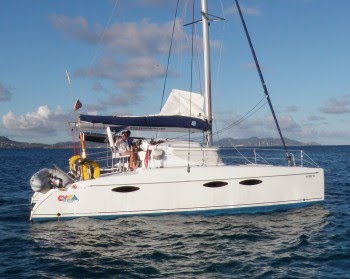